When you're considering a scene as a potential painting subject, remember that most of the information you see does not need to be specifically identifiable in the finished painting. 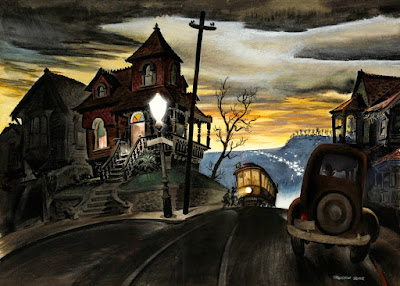 Take a look at the grey shape behind the cable car in this night scene by Preston Blair. Could there have been more information visible out there than the artist chose to include? This is an urban scene, after all. Chances are the whole city lies below this vignette, but it suited Blair to make a very general statement about it, leaving out everything except a twinkling road. 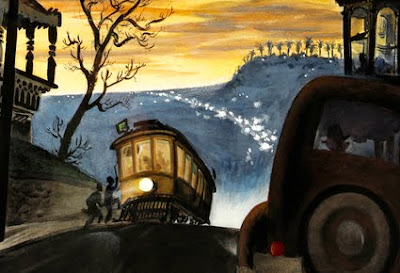 Now look at the foreground shapes. How many are there? It's hard to say, exactly, since they're all very dark, and seem to merge into one another. The artist took care to separate the red house from the others, but just barely. As we look at the shapes to the left of that house, it becomes obvious that Blair chose to generalize about the similarities between buildings rather that to specify how they were different. He knew that we know enough to recognize the shapes as houses, and that's enough to tell the story. 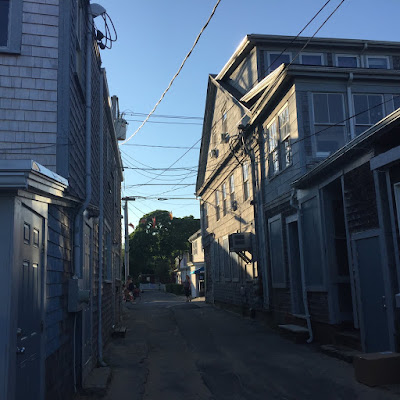 Squint at this alleyway scene. The heavy shadow seems to invite a general treatment. It is by far the most noticeable feature of the majority of the page, and needs to be stated clearly before any secondary information, like the windows and doors in the shaded areas are included. Imagine an interpretation of the subject that had all the shadow shapes and none of the rectangles that are there within the shadow. Now imagine another version that has all the windows and doors and gutters, eaves, clapboards, etc., but no shadows. Which one would look more like what we see when we squint?
No further questions. I rest my case.
For homework, study this scene and paint it to your satisfaction.

Posted by Hoffmann Watercolors at 12:45 PM