We all made plenty of studies of the model on Wednesday that will serve well for an extension of figure work. Pick a couple to use for the poses and explore the color possibilities. Here are some examples that may open doors for you. I know one of them is not a watercolor, but it has great colors.
Have fun. 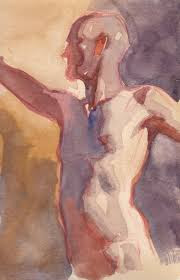 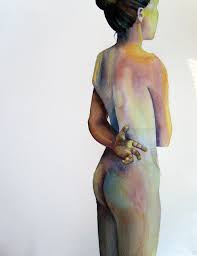 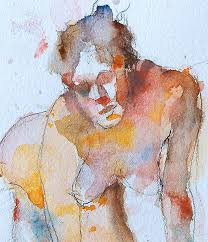 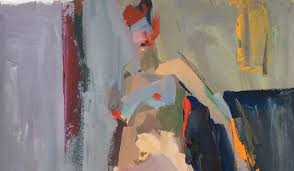 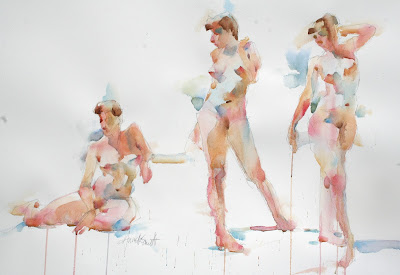 Posted by Hoffmann Watercolors at 10:05 AM No comments:

Here are a few heads with distinct shadow shapes. Working in monochrome, see what an over-simplified version conveys by painting three-layer interpretations of the photos.

Dry the paper between layers (light, middle dark) to keep your attention focused on value. Subtlety is not the goal in this exercise. It's meant to explore how well seeing in layers applies to another subject.

I recommend working from the black and white photos first, then trying to do a monochrome version of one of the color images.

Use good paper. Don't fuss. Keep the drawing to a minimum. 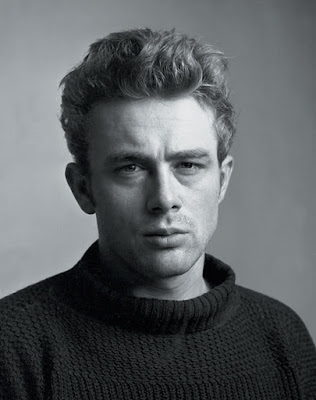 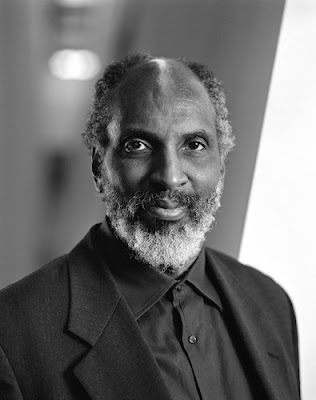 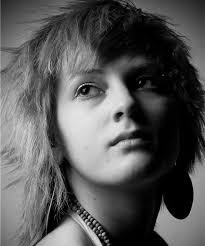 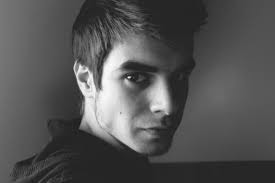 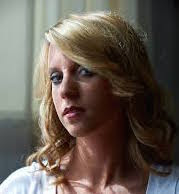 Posted by Hoffmann Watercolors at 9:41 AM No comments:

Isn't it sweet when a subject clearly presents itself as a watercolor, with distinct shapes of light, middle and dark value? 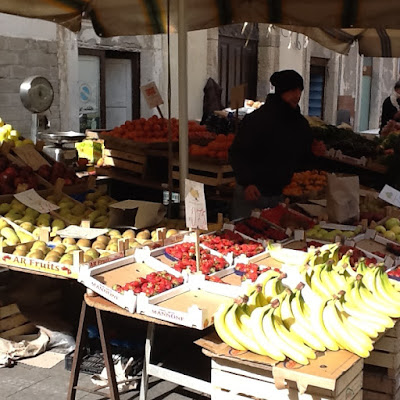 Imagine wetting the paper first, then blocking in lights everywhere. The fruit could be a cloud of light yellow and red. It wouldn't matter if it bled a little into the triangular shape below, since the strong darks in that area will give sharp definition later to the bottom edge of the fruit. And it would be good if the red and yellow bled into the shadow area, since there are fruits in the shadow area, too.

The strip of middle value doors could all be painted a color like the warm neutral you can see right behind the post in the center. I'd put some other neutralized middle value colors in while that wash is still wet. You can run those middle values right up to the top of the page. Later, you could add some slightly darker verticals in that area to show that there are various rectangular doors. Soft edges or hard? I think it could be either or both. I wouldn't make them as dark as the shadow section that comes last. That would make the background come forward. The dark awning along the top, if you decide to include it, could go down right on top of the middle values after they're dry.

Finally, the big shadow. Use your practice paper to get the value dark enough so you don't have to go back over the shadow again. If the fruits don't show through the shadow glaze well enough, add some red, yellow and green into the shadow while it's still wet. Make sure the paint on your brush is pretty thick for this job to prevent blooms, but If a bloom occurs, leave it.

How much information does the painting need before it's done? That's up to the individual painter, of course, but be respectful of your alter ego, the viewer. Leave a little for them to interpret.

It may be a good idea to read this again before launching into a painting. A monochrome value study would also be very helpful.

Posted by Hoffmann Watercolors at 8:27 AM No comments: 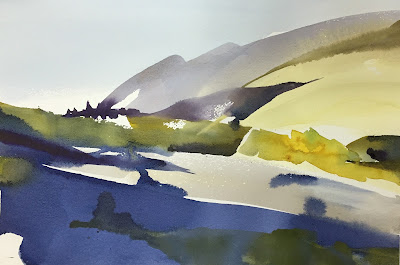 This luscious landscape could only have been made by letting go of the specifics of the scene and generalizing about shapes,  colors, values and edges. What is gained by taking liberties with accuracy is the freedom to devote all one's attention to the beauty of the paint.
It's a very good trade. We can no longer count the trees in the green shapes, but we all still recognize this as a landscape, and the pleasure of seeing the flow and the transparency of the medium is worth much more than an inventory of its contents.
Perhaps the most important benefit of the trade comes from not having to correct what the paint does on its own. Laurie Wigwam never had to go back and fix anything in this painting, which accounts for the overall feeling of certainty. 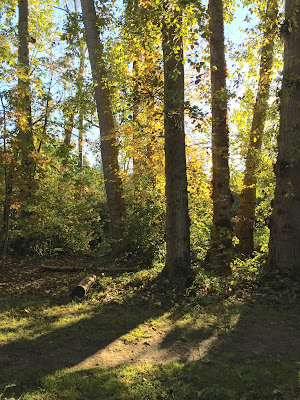 Imagine this picture without the trunks and shadows. The blue, yellow and green shapes would look almost arbitrary. The guidelines by which you might paint the first couple of layers would be very broad. When you can see in advance how well the dark mid-value shadows and the dark trunks would give meaning to the  yellow and green masses of foliage,  your brushwork in the earlier stages is liberated from the need to be careful. All of your attention could be devoted to displaying the gorgeous fluidity of watercolor. That's what brought us here in the first place, after all. 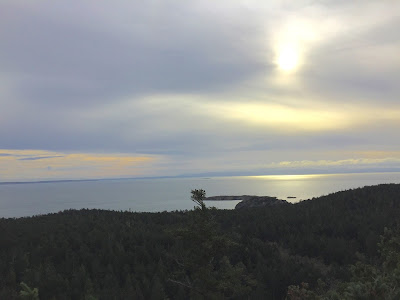 Accuracy is overrated.
In the photo above, the juxtaposition of the bush and rock and tiny island is unfortunate. I want to move the island so it doesn't appear to touch the tree and the rock. If it didn't occur to me that I have permission to do that I would get hung up trying to duplicate something that is only going to create ambiguity on the page. The need to be careful would also slow down my brushwork, leading to a different feeling in that area.
Remember, it's the spirit of the scene that we are interpreting, not the letter.  I would rather have a juicy, spirited painting with generalized content than an dry accounting of the scene with everything in its place.

Here are a couple more images that are full of opportunities to let the paint have its way. Often holding on to a limited kind of accuracy makes it easier to relax your hold on everything else. To give that a try, I recommend getting the values right rather than the drawing. Have fun 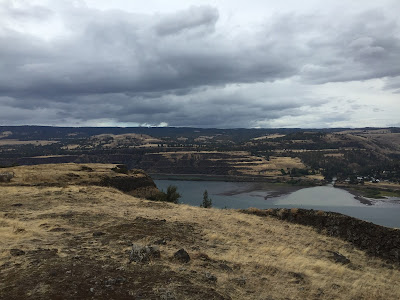 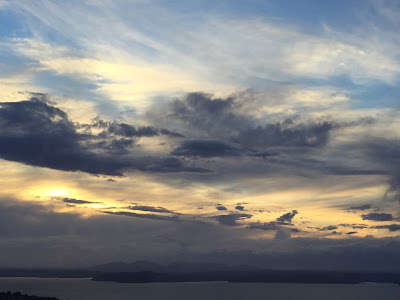 Posted by Hoffmann Watercolors at 9:09 AM No comments: