At what stage of the development of a painting do the lights become clearly delineated? Is it necessary to clarify the specific outlines of each shape right from the start, or can we wait for the darkest darks to do the work? Can this be the job of the mid-value shapes? Are the answers different from picture to picture?
Why did I get involved with watercolor in the first place?

We saw today that a fairly simple mapping of the mid-value shapes can reveal how much they do, image by image, to make clear the narrative content of the picture. If the content remains vague with the mid-tones laid out, then it is likely that the darks are required to finish the story. This suggests that we can stay casual in the application of both the lights and the middle value forms.
If, on the other hand, the content of the picture is mostly defined with only the middle-values in place, then we know they must be applied with some care. 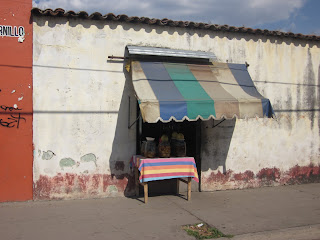 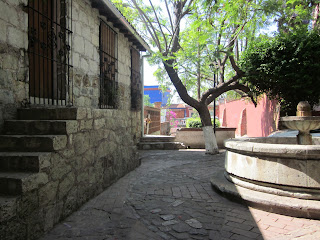 Make a quick study to learn what role the middle values play in your image. Use the information to make a version where you stay very loose as long as possible.
The idea is that once you know which stages of the picture are clarifying what has gone before, you are free to paint the earlier layers playfully.

Have fun.
Posted by Hoffmann Watercolors at 9:19 PM No comments:

Translating an image or a scene into watercolor is easier if you can envision the painting as a series of layers. Using the image you selected at the end of class, make a simple study along these lines. 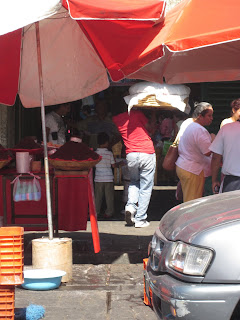 This market scene depicts a shallow space, crowded with shapes. It is important to make clear where the individual components are, relative to each other. I would want it to be obvious that the car is closer than the umbrellas, which, in turn, are closer than the sunlit people. Beyond them are more people, subsumed by the deep shade. For each of the major shapes in your scene, draw a simple outline to locate it on the picture plane. Remember, this is meant to be over-simplified. We only need to know where the shapes are, not what they are.

Next, block in each of the shapes with a first layer. The layers will progress from light to dark, allowing each successive layer to be applied on top of the previous ones. To help see a couple of layers ahead of yourself, try asking, "Is there a way I can paint the entire shape with a wash that will underlie everything that will come later?"

Use three colors, one red, one blue and one yellow, to make all the colors you see.
Have fun
Posted by Hoffmann Watercolors at 8:38 PM No comments:

It was exciting to see the work we did after pushing the boundaries yesterday. It is clear that holding onto a roughly accurate range of values makes it possible to be more adventurous with color and drawing.
Let's try it again.

Look for an image, or set up a still life that presents a clear feeling of space and light, even in monochrome.

Make a monochrome study of your subject. Each of the major shapes can be assigned a value by looking for something in the scene that is lighter and something that is darker. If nothing is darker than the shape you are trying to place, then you know it must be the darkest shape in the picture.

Now choose one of the following exercises:

1) Using your value study as a guide, replace the colors you see with more intense versions, making sure the value is in an acceptable range. For example, if the highlight on your apple appears slightly bluish, why not make it pure cerulean? As long as it is light enough to read as reflected light, the color can be greatly exaggerated.

2) Hold on to the values, but let go of the colors altogether. Let instinct guide your choices, inventing according to a logic that even you don't quite understand. If the trees are orange and blue, then the sky must be lavender, right? Unless it's minty green.

Have fun.
Posted by Hoffmann Watercolors at 6:48 PM No comments:

If you haven't yet gotten your good paper, you can do this exercise on just about anything. The object is two-fold: to awaken your instinct for color mixing, and to strengthen your awareness of the role the primary colors play in creating neutrals.

Part one:
Choose one red, one yellow and one blue, with an eye toward the ones that will "go both ways". Look for the yellow, for example, that will make good greens and good oranges.
Mix together two of the three colors, adjusting and fine-tuning until neither one dominates. Make a small patch of the new color on your paper.
Now add the third color to the mix, until none of the three dominate. Make a patch of the new color on the paper.
Make the darkest version you can of the three color mix, making sure no one color dominates. Just keep adding pigment to the puddle (but no more water). When the paint is so thick that it looks shiny even after it's dry, you've gone too far. Add a little water, and try a patch on the paper.

Part two:
Look in magazines for pictures with areas of solid color about 1 1/2" square, or bigger. Cut some out, paste them onto your paper, and try to mix a perfect match. Use the same limited palette you used for part one. Make patches of your attempts beside the cut-out.
Now try to match the same colors using a different set of primaries. Write down the colors you used near the patches.
Have fun

Tom
Posted by Hoffmann Watercolors at 2:28 PM No comments: