Hi Painters
Here's a brief essay on how thinking in the abstract helps prevent becoming specific prematurely.
See if applying this approach provides you with more room to interpret your next subject, and be prepared to tell us about your experience.


One way to keep from getting specific too quickly is to stay abstract as long as possible. For me, this is mainly a matter of how I think about the subject. During the inner dialog that accompanies the painting process, I can describe the image by naming everything in terms of the content, or I can stick to the language of form. For example, here is a narrative, content-based description of the photo below: 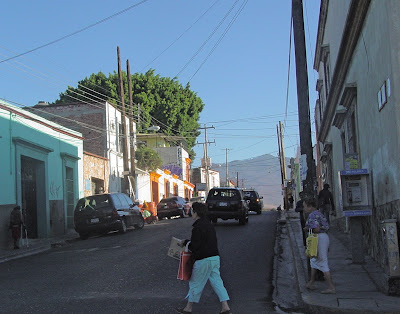 A street scene in Mexico, late in the day: One side of the street is in sunlight, the other in shadow. A woman carrying shopping bags is crossing the street, while another is standing on the sidewalk. Several cars, some parked, some driving, are in the middle distance. A big tree shows above the sunlit buildings. A mountain in the distance stands out against the clear blue sky.

Here is the same scene described in the language of pure form:

The right quarter and the bottom third of the page are rectangles of cool, dark, neutral. A “triangle made up of warm, very light, rectilinear forms begins at the center of the page and widens toward the left.  A pattern of verticals is distributed across this light triangle. Above it a semi-circle of intense medium dark green is silhouetted against a medium value blue, which fills the entire top left quadrant. Where the triangle and the dark strips converge, a mid-value purple-grey form widens upward, one third of the way into the blue.

How I choose to think about the picture can have a profound effect on the way I begin to paint it. In the early stages of a painting I usually want to establish the general structure of the image, without getting caught up in specificity. The painting has to work first of all as an arrangement of big shapes, and at this level it is more important for the pattern of darks and lights to be strong than for any specific information about content to be present.

Until I have taken care of the fundamental needs of the painting, I don’t have sufficient basis for deciding how much information to include. It is easy to get involved in the proportions of the woman crossing the street, for example, and lose track of the fact that she is primarily part of a big shadow. If I were actually standing in the scene, I would be aware of the figures, but I would probably not be studying them in any detail.  In the painting, I want the elements of the picture to have an emotional presence similar to the actual experience, which is not necessarily the same thing as seeing them in a photograph.
Photos exert a powerful influence. It is easy to assume that the painting will only feel right if I duplicate the photo exactly, especially if I am already thinking of the elements of the picture as “people, buildings, cars, and trees”.
But if I am thinking in terms of big, abstract shapes, there are no people, no sidewalk, no shopping bags; just a few somewhat darker and lighter strokes within the big shadow.

Here is a painting of the scene done from this point of view: 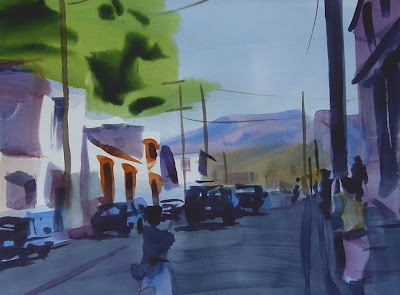 The figures in the foreground have a presence appropriate to the role they play in the big picture. Thinking abstractly allows me to stop as soon as I see that they have done their job. A content-based approach would have invited all the associations that attend the names of every part of the scene. Like many realist artists, I am susceptible to an imperative to do justice to each subject. I could easily get wrapped up in accurately rendering posture, hairstyles, ankles, and on and on, until the figures took on too much importance in the scene.

Posted by Hoffmann Watercolors at 11:21 AM 2 comments: