For this week's homework we'll use only two images. I'd like you to paint both of them. Start by identifying the major shapes. 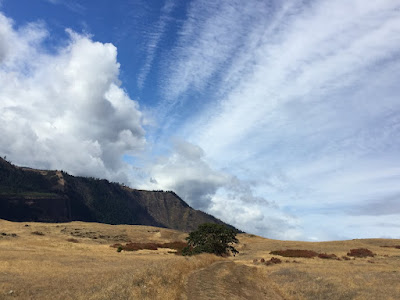 This is a well-behaved image. It resolves nicely into only three shapes; sky, bluff and grassy plain. Feel free to eliminate that bush in the middle of the plain, or move it where it doesn't get tangled up in the bluff. 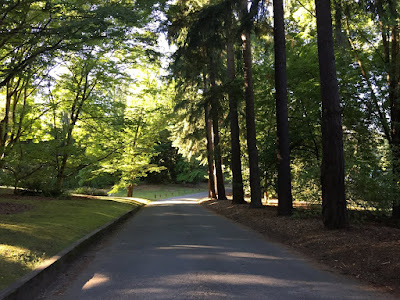 This one can be seen as having four shapes; three triangles along the bottom, and the large rectangle that makes up the whole top.

Each of these images could be approached by first looking for the lightest tone in each shape, and painting that as an overall wash. The road in the one above, for example, would be all the light pink of the sunlit spots. The grassy triangle would be entirely the light yellow green. The brown triangle on the right is not very light anywhere, so it could be painted the dark brown that will be its final tone. What about the big rectangle? When you look past the mid-values and the darks there is a large area of light yellow-green that stretches from one side to the other, and a very pale blue - almost white - along the top. It can be painted as one shape with two pale colors.

That takes care of the first layer, the lights. Next comes the layer of middle values. Look at the road again. Most of the first layer is covered with a wash of cool middle value. There are just a few holes in that second layer that leave the first layer visible. The grassy triangle is also mostly middle value, with one light strip at the near end and one more the far end. Each successive layer goes on top of the previous one, usually leaving some of that earlier layer visible. The darkest darks come last, since they will cover the middle value shapes and the lights. It is much harder to get a light to go on top of a dark. You would need opaque paint to pull that off.

As you finish each layer, take a moment to assess the effectiveness of the illusion of light and space. When do those illusions become convincing? Is it when the first layer is applied, or is it later?

Paint both of these, if you have time. As much as possible, try to keep the whole page at a similar degree of completion.

Read this again before you start painting!
Have fun.
Posted by Hoffmann Watercolors at 8:49 PM