Just like every other subject, the figure can also be treated as a series of layers that progress from general to specific and from light to dark. The same set of questions that inform the development of a still life or a cityscape apply: 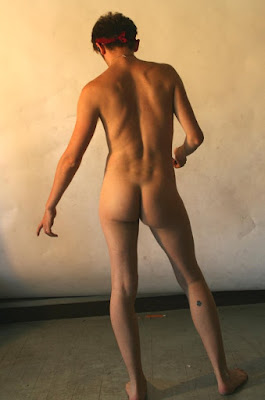 1) Is there a way I can paint the whole shape with an overall wash that can underlie everything that will come later?

2) Is there anything I should reserve from the previous layer?

3)Is there anything I should do while the wash is still wet?

A logical choice for the first layer, as usual, would be the color and value of the light-struck areas of the figure.
You might choose to reserve the white of the paper in a few spots that catch some extra light.
While the wash is still wet you could indicate some variation in that first layer, like the slight redness of the calves and the neck and hands. These would be very similar in value to the overall wash.

Layer number two is the shadow shape. Much of it is soft-edged, but for your first few sketches I'd recommend ignoring that, and drying the paper before beginning the shadows.

Making a study of just the shadow shape on blank paper is a good way to get accustomed to seeing the shadows as a separate layer, and learning what role they play in the definition of the figure and the light.

Layer number three is the darkest darks. In a figure with a strong light source these are often lines that occur where two body parts are pressed together, such as the upper arm meeting the torso, or where a breast rests on the ribcage. Sometimes some of the shadows are also very dark 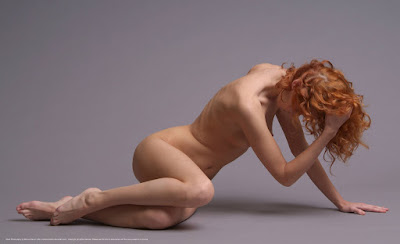 When you mix up the color for the first layer, keep it pale enough that the shadows, which are usually middle value, will make a noticeable contrast. Also, keep in mind that when you are applying that first layer, it is not yet necessary to perfect the shapes and proportions of the figure. The shadows and the lines provide ample opportunity to give definition to the body. Putting in a background offers yet another chance to trim off any awkwardly indicated bits. 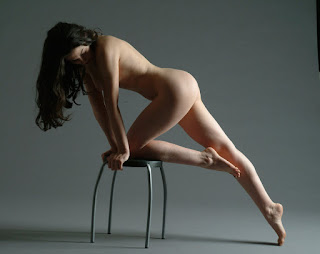 The notion that anything is thoroughly represented by three simple layers is, of course, absurd. The subtleties of color and value are beautiful and fascinating, but to attempt to include them all would lead to a seriously over-painted watercolor. For now, at least, let's aim for a reasonable representation of the thrust of a pose, the feeling of strong light, and maybe a little of the presence of an individual.


Posted by Hoffmann Watercolors at 2:02 PM