We've been practicing identifying where in the sequence of layers a part of a painting gets its final definition. When, in other words, should the viewer be able to tell what they're looking at? Seeing this in advance frees you to apply paint in a carefree manner, because you know that a later stage of the process will bring it into focus. 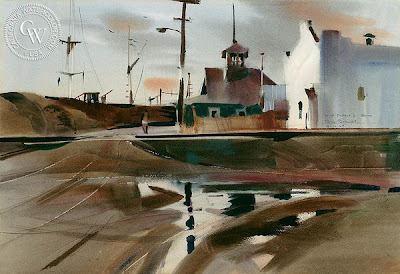 In Rex Brandt's Mud Puddle, take a look at the white building on the right. Before the half-dozen dark strokes were applied that building was pretty casually represented - no hard edges, one loose, juicy wash. The artist knew that those darks that come next would make his first layer meaningful, so he did not trouble to make sure we could tell what was being depicted. My hero!
The pleasure the viewer gets from being allowed in on the process is a big part of our job. This is what makes the conversation two-sided. 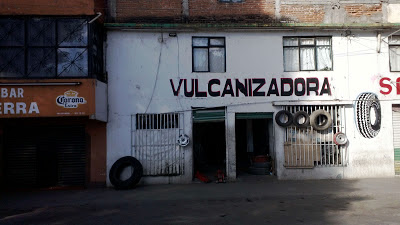 Can you picture this scene without the darkest darks? How well-defined would the shapes need to be when the first layer goes on? If the red rectangle on the left bled into the blue one above it, do you think the dark shapes and lines could pull it all together?

Here, some of the lights that would be reserved right in the beginning of the painting sequence, like the rippled edge of the awning, or the long, white fascia that runs along the top of the building are doing the work of giving definition to the shapes. They would have to be done somewhat carefully. But everything else is defined by the final layer darks, which frees your brush when you are suggesting the complexity of the figures and the produce. The viewer does not need to know that those shapes are pineapples and those are onions until the color gets surrounded by the strong darks. Or, maybe not even then. Thois image would be a good one to zoom in on, cropping to make fewer shapes (light, middle, dark).

Think your way into an image or a scene from this point of view. Take a few notes, and have some fun.

Posted by Hoffmann Watercolors at 11:36 AM