Coming to know a new subject in terms of washes and strokes can be a puzzling prospect. Where do I begin? To focus your awareness on the progression of a painted version of your subject, it helps to limit the distractions. First on the list could be color, which is often the most insistent variable. For this exercise, let's just set color aside, and make a monochrome study. Choose a color straight from the tube, so you aren't using your attention to keep matching one that you've mixed. It has to be one that can get dark enough to represent the darkest darks. You will be making a three value study in a single color.

Everyone chose a photo to work from. If you missed class, here is an image that will serve well as a subject. 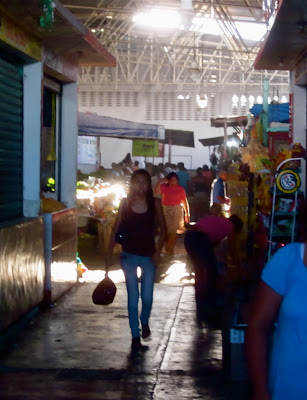 Start by squinting hard at the image, so that shapes of similar value merge together, and texture dissolves. Assign a value - either white, middle or black - for each major shape. This requires some amount of compromise. You will have to decide whether to round things up or down. Remember that if you make a mistake, the study will still do its job very well. Finding out that a given shape should have been dark rather than middle, for example, is just as useful as getting it "right". The job of the study is to provide answers to questions. It does not have to be a handsome product in its own right.

Locate the white shapes. Paint the entire page middle value, leaving just those whites unpainted. Let the paper dry completely.
Now apply the dark layer, reserving the middle values and the whites. That's the whole story. All that's left is to assess the result. Where do you wish there were more subtlety (such as another value, halfway between black and middle)? Where should there be more specificity (where the picture would benefit from knowing a bit more about what comprises that big dark shape in the corner, for example)?
Make your notes directly on the study.

Posted by Hoffmann Watercolors at 9:16 PM