Wednesday, in class, we spoke about the need to see beyond the darks and middle values to recognize what the first layer will look like. Here is a progression of images that illustrates this practice:
Deliberately ignoring the layers that come later is easier if you have a good sense of what they look like on their own. To see right through the darks, for example, it helps to be able to recognize them as a pattern apart from the lighter forms. Try picturing the darkest darks from this photo as a separate image. It helps to squint: 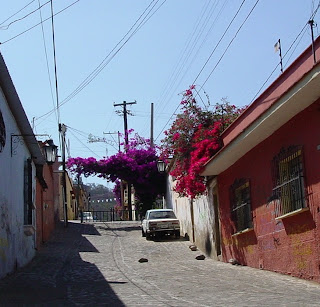 Callejon, Oaxaca
Staring at the top, the wires would all be part of the darkest layer, along with the vertical poles, the eave and windows of the buildings on the left, the cast shadows of those buildings, the underside of the purple bougainvillea…what else?
Without the lights and middle value forms, the darkest layer would look like this: 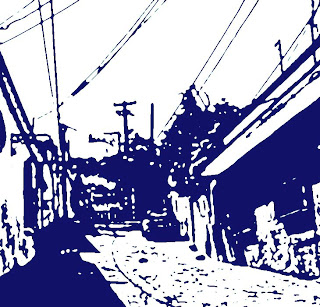 Callejon, Oaxaca                  Darkest darks
If the layers were printed on transparencies, this could literally be peeled back to reveal the middle values and lights beneath. Instead, when we look at the photo or the actual scene, we do the ”peeling” mentally.
How much care does each layer require?
With a high-contrast image like Callejon, Oaxaca, when we see the darks separated from the other values, it is clear that they do most of the work of establishing the illusion of reality. The cast shadows reveal the strong light, while the obvious perspective of the buildings defines a clear feeling of space. Recognizing this early on can be truly liberating. If we can depend on the darks to pull the whole picture together, the lights and mid-values can be applied very casually.
I have deliberately painted “outside the lines” to see if it’s true that the darks have enough narrative clarity to make sense of this mess. If it works, it means that when I’m laying down the first two layers, I need not be distracted by detail, and all of my attention can be devoted to simply making gorgeous, juicy paint.
This is a good example of the benefit of asking “What Needs to be True in the Finished Painting?” Being a little careful with the darks allowed me to be carefree with everything else.
Look for a high-contrast image where the darks appear to do most of the narrative work. Try making a study of just the darks, in monochrome. How much does this inform the care you need to take with the first layers? If you are encouraged to relax with the lights and middle values, try really letting go. This is your chance to be as loose as you want. Go for it!
Have fun
Tom
Posted by Hoffmann Watercolors at 8:50 AM